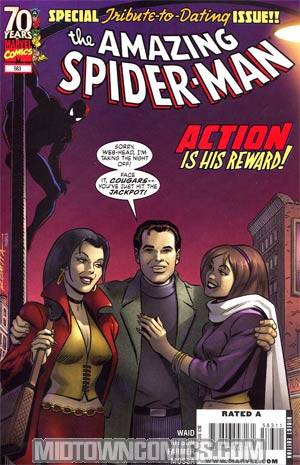 YOU ASKED FOR IT, YOU GOT IT! PETER PARKER ON A DATE! After the revelations of “Mind on Fire”, love is in the air for more than one member of the cast and Pete finally gets some time out with the ladies. (and who better to bring it to you than two men who both had dates as recently as 1987!) Amidst the romance though, forces are gathering that will spell trouble for Peter in the months to come.

To celebrate the inauguration of Barack Obama, Marvel proudly presents Amazing Spider-Man #583 with an all-new 5-page bonus story teaming one of the world's most recognizable political figures with the world's greatest super-hero! Written by Zeb Wells with art by Todd Nauck & Frank D'Armata, the new story takes place in Washington, DC on Inauguration Day as one of Spider-Man's oldest foes attempts to thwart the swearing in ceremony of the 44th President of the United States!