A Diamond Select Toys release! The VS series of Marvel Gallery Dioramas continues with one of the most powerful villains of all! Dark Phoenix emerges from a flaming phoenix symbol in her classic red costume, ready to take on any and all comers. This approximately 10-inch sculpture is made of high-quality PVC and features detailed sculpting and paint applications. It comes packaged in a full-color window box. Designed by Uriel Caton and sculpted by Victor Hugo Sousa! A Diamond Select Toys release! Crouching on a rooftop, Eric Draven stalks his prey in this all-new Gallery Diorama based on the cult-favorite movie The Crow! With the Crow on his shoulder and steam circling his feet, this approximately 10-inch sculpture is made of high-quality PVC and features detailed sculpting and paint applications. It comes packaged in a full-color window box. Designed by Caesar, sculpted by Rocco Tartamella. 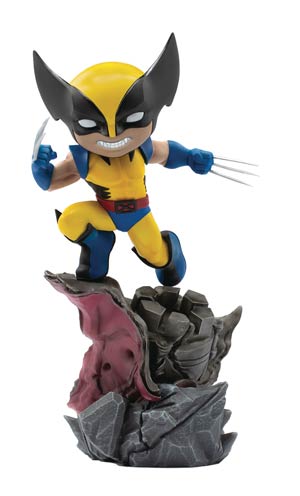 From Iron Studios. Iron Studios proudly presents its first MiniCo line of Marvel's most beloved mutant superheroes, the X-Men, one of the most requested series by fans and collectors, in Iron Studios' stylized Toy Art version. The collection is based on the design of comics from the 1990s, one of the most popular and cult phases of the group, with a diorama scenario of the heroes on top of a scrap of a Sentinel Robot, one of their classic enemies, and explores the most striking traits of each character's personality through their looks. A Gentle Giant Ltd. release! The Dark Lord of the Sith ignites his crimson lightsaber blade in this all-new 1/6 scale mini-bust! Depicting Darth Vader with his cape in one hand and lightsaber in the other, this approximately 8-inch bust features detailed sculpting and paint applications. Limited to only 2500 pieces, it comes packaged with a numbered certificate of authenticity in a full-color box. Designed by the Silva Bros., sculpted by Anissa Tchoub. A Diamond Select Toys release! The battle continues! Spider-Man joins the fight in the newest entry in a new sub-line of Marvel Gallery Dioramas, perching atop a lamppost over a rubble-strewn environment. Designed to display on its own or with others in the series, this approximately 10-inch sculpture is made of high-quality PVC and features detailed sculpting and paint applications. Packaged in a full-color window box. Designed by Nelson X. Asencio and hand-sculpted by Jean St. Jean! A Diamond Select Toys Release! Time to put the hammer down! The second release in DST's all-new Marvel Femme Fatales PVC Figure series is none other than the goddess of thunder herself, the all-new, all-different Thor! Measuring approximately 9 inches tall, this PVC figure of the mysterious new Thor perches atop a rocky outcropping, as if preparing to take flight or summon a lightning bolt from the heavens. Packaged in a full-color window box. Sculpted by Sam Greenwell! A Diamond Select Toys release! This diorama be worthy! Thor makes his classically-styled debut in the Marvel Gallery line of PVC dioramas with this all-new sculpt! Posed swinging his hammer on a rubble-strewn base, this sculpture of the God of Thunder is part of a new series of battle-inspired scenes. This piece stands approximately 9 inches tall, features detailed sculpting and paint applications and comes packaged in a full-color window box. Designed by Nelson X. Asencio, hand-sculpted by Jean St. Jean! A Diamond Select Toys release! The Vision appears! A long-awaited addition to the Marvel Gallery line, this approximately 10.5-inch-tall sculpture of the synthezoid Avenger depicts the Vision on a battlefield base, phasing through a piece of rubble. Featuring detailed sculpting and paint applications, it comes packaged in a full-color window box. Designed by Nelson X. Asencio, hand-sculpted by Jean St. Jean! A Diamond Select Toys release! This is the big one! Clocking in at approximately 24 inches, this Milestones statue of the Hulk as he appeared in Thor: Ragnarok is one of the biggest DST has ever made! Limited to an edition of only 1,000, this resin statue can be displayed on its own or join with the upcoming Gladiator Thor statue to form a scene from the movie! Each statue comes packaged with a certificate of authenticity in a full-color, hand-numbered box.