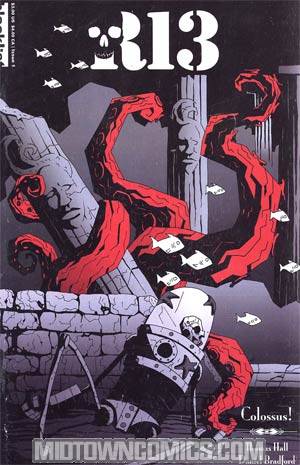 "“Colossus!”: It was the most unusual catch the fisherman had ever seen: a robotic creation with a skull for a head! ROBOT 13 has no idea what or who it is, nor where it came from. All it knows is that it has an instinctual and irresistible drive to protect mankind from mythological creatures of destruction. In this pulse-pounding debut issue, you’ll witness this unlikely hero’s dredging from the ocean depths, and its life-or-death battle with a terrifying Kraken! Robot 13 does all he can to protect those who’ve discovered him, in the hope that in the process, he’ll discover who...and why...he is. It’s only the beginning of this epic hero’s journey… and you won’t want to miss an issue of this thrilling quarterly series! Be sure to order your copy of what Newsarama’s Jeff Marsick calls “the best book of 2009” today!"