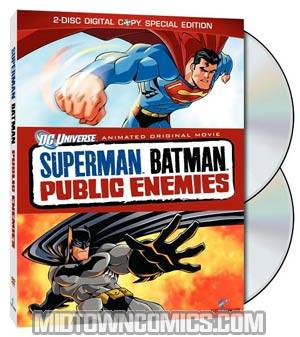 Bruce Timm, who was a key producer on Superman: The Animated Series and Batman: The Animated Series, returns to the DC Universe once again with a newly announced direct-to-video (DTV) release scheduled to arrive from Warner Home Video on September 29th. And the voice cast is going to be exciting for fans, as it consists of Superman: TAS stars Tim Daly ("Clark Kent/Superman") and Clancy Brown ("Lex Luthor"), and Batman: TAS star Kevin Conroy ("Bruce Wayne/Batman"). Also among the voice cast are Allison Mack (Smallville), CCH Pounder (ER, The Shield, Justice League's "Amanda Waller"), and John C. McGinley (Scrubs, Justice League's "Ray Palmer/The Atom"). Here's the studio description of this release:

A desperate solution">A desperate solution for a troubled country: Lex Luthor for President, with the Justice League in the service of the government. Only Batman and Superman stand against the new regime...and their disloyalty proves to be exactly what Luthor intended! Using their outcast status to instigate a scandal against Superman, Luthor finally tastes a victory in his vendetta against The Man of Steel.

From Executive Producer Bruce Timm, and voiced by the cast from both hit Batman and Superman animated TV series including Kevin Conroy, Tim Daly and Clancy Brown, this DC Universe Original Animated Movie of Jeph Loeb and Ed McGuinness's popular graphic novel seethes with political intrigue and action-packed battles between heroes all believing they're on the right side of the law.
The Video is widecreen, in anamorphic on DVD and in high-definition on Blu-ray Disc. Audio on the DVD is English Dolby 5.1 and Spanish Stereo; the Blu-ray sound formats have not been specified just yet. All versions included English subtitles. This 75-minute DTV feature will come in three variations: a single-disc Superman/Batman: Public Enemies DVD with just the main feature, a Superman/Batman: Public Enemies - 2 Disc Special Edition DVD with the bonus material listed below, and a single-disc Superman/Batman: Public Enemies - Blu-ray Disc Special Edition version with additional BD-only bonus material, also listed below.

Also included on both Special Edition versions will be a Digital Copy of the feature.