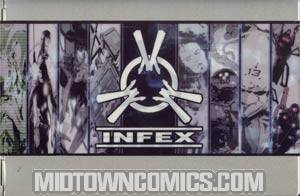 INFEX is a fast-paced thriller about a young woman - transformed into a viral weapon - who must escape from the bio-warfare facility that created her. Unaware of the lethal mutation dormant within her, Evelyn “Ivy” Kendall, discovers that her father’s chemotherapy holds the key to developing genetically engineered bio-soldiers and the secret to human evolution. Ivy is recruited under the watchful eye of Ingen Bio, but when her mutation is discovered, she is quarantined beneath their hidden underground labyrinth. Assisted by former soldier Garrett Thorne, she must control her new power to escape the facility and survive."