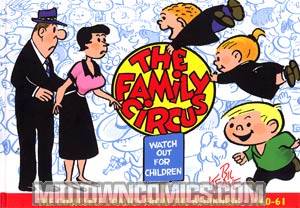 "Celebrate the 50th anniversary of THE FAMILY CIRCUS!

The Family Circus Library, Vol. 1 by Bil Keane collects the classic newspaper strip in chronological order for the very first time, in beautifully designed hardcover books. Starting with the very first strip, originally published on February 29th, 1960, The Family Circus Library, Vol.1 will feature a complete run of the first two years, including dailies and Sundays.Beautifully produced by Eisner award-winning designer, Dean Mullaney, the mastermind of the Library of American Comics, and just in time for the 50th anniversary of one of America’s most popular and beloved strips!"