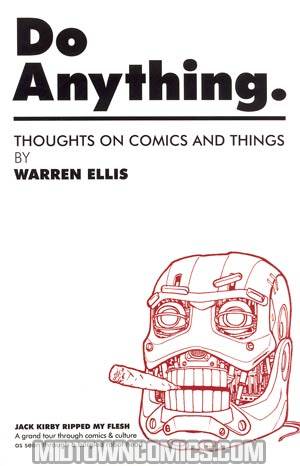 "From Warren Ellis, the award-winning author, comics creator and popular columnist (and who is currently writing the screenplay for the film adaptation of the comics series GRAVEL, also published by Avatar Press), comes a collection of the most mind-bending columns you've ever read: DO ANYTHING. DO ANYTHING VOLUME ONE: JACK KIRBY RIPPED MY FLESH collects the first 26 chapters of Ellis’ text masterpiece and is a grand tour through comics & culture as seen through a burgled robot head. The robot head of Jack Kirby lives on Warren Ellis' desk. It knows everything and is connected to everything. You must obey the robot head of Jack Kirby. There are many ways to look at comics. In this book, we see the medium through the hazy android eyes of Jack Kirby (actually the stolen and repurposed head of the missing Philip K Dick robot, which Mr. Ellis confesses to swiping off the back of a plane), taking a rattling ghost-train ride through the history of comics. David Bowie, the CIA, mad architects, Will Eisner, Frank Zappa, Tintin, the designer of Skylab, a train station in Paris, Arthur C. Clarke, the circus, the Black Panther Party and William S. Burroughs: all of these things are connected by Jack Kirby, all part of the secret history of comics, and all illustrating the special nature of the medium as the place where you can do anything. The continuing DO ANYTHING column, from which this book is derived, can be found every Tuesday at http://www.bleedingcool.com."