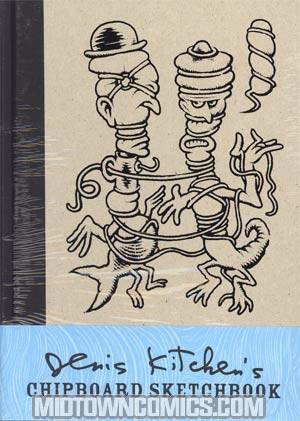 "Following on the heels of The Oddly Compelling Art of Denis Kitchen, an overview of the pioneering underground cartoonist published this summer by Dark Horse Books, Denis Kitchen's Chipboard Sketchbook is comprised of particular kinds of drawings on ""chipboard"" that Kitchen has done below the radar for many years. Chipboard is the heavy, grainy card stock at the base of writing tablets. The artist started the habit of drawing on this unlikely substance during long, often boring production meetings at Kitchen Sink Press, his former company, when he would flip his notes tablet over and doodle with a combination of the only tools at hand: a Sharpie pen and fine-point Uni-ball pen. With subject matter often extremely bizarre, or, in his own words, even ""demented,"" Kitchen filed these away for many years. They were seen only his close friends and colleagues...until now! Measuring 6.25"" x 8.75"", this collection features an extra-thick 3mm cover stock (chipboard, of course) with a de-bossed cover image and vertical belly band. The full-color 128-page hardcover was edited and designed by Greg Sadowski and art directed by John Lind, who won a 2009 American Graphic Design Award for their work on Underground Classics (Abrams). NOTE: Contains images not suitable for minors." 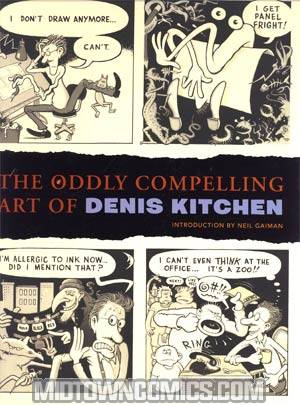