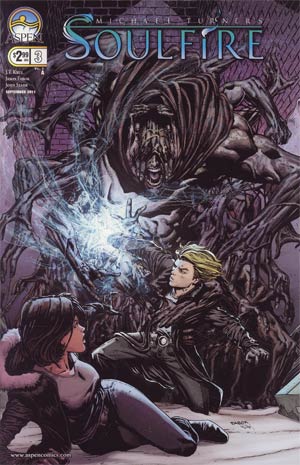 The magic has returned! But, this time...the light has grown dark. The Chaos has taken over! Across the globe, the number of victims to this dark and sinister magic begins to grow quickly. But Malikai, confident with his own increasing power, encounters the Chaos with surprising results. However, the biggest challenge to Malikai's existence will prove to be someone not looking to take his power-but his life. While in the magical kingdom of Anantia, Grace attempts to hold together the people after the vicious attack by Onyx and the murder of their esteemed leader. Yet, Grace will soon learn that the power of Onyx and the Shadow Magic are far more evil than even she could have ever anticipated! New adversaries, exotic locations, and a fresh cast of exciting characters, including some from the Soulfire Universe's long forgotten past, reign supreme in this epic third SOULFIRE volume!