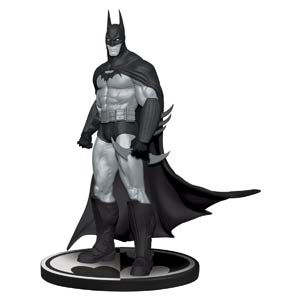 "From within the walls of Arkham Asylum, The Joker orchestrates the most elaborate scheme of his career: create an unstoppable army of Bane-like creatures to take over Gotham City. Only Batman, using an amalgam of detective, combat and stealth skills, can end his arch-nemesis' plans.

This statue based on the video game design measures approximately 7.25"" high x 6.25"" wide x 4.75"" deep, is painted in monochromatic tones, features a Bat-logo-shaped base and is packaged in a black and white box. Limited Edition. Manufactured to order."