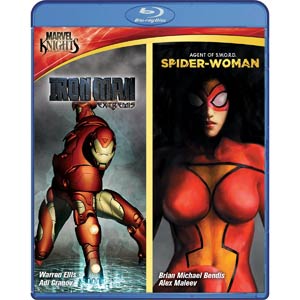 "Spider-Woman: Ripped from the pages of ""Secret Invasion"" and ""New Avengers,"" this explosive, highly anticipated motion comic from Marvel follows the new adventures of Jessica Drew AKA Spider-Woman as she rediscovers her life in a world she did not make. The alien Secret Invasion is over. Now comes the reckoning and Spider-Woman is fighting to the death. From the Eisner Award-winning (Daredevil) and New York Times Graphic Books Best-Selling (Halo Uprising) team of Brian Michael Bendis and Alex Maleev. Includes a visual history of Spider-Woman, a music video and more.

Iron Man: It's the beginning of a new era for Iron Man as renowned scribe Warren Ellis joins forces with digital painter Adi Granov to redefine the Armored Avenger's world for the 21st century - a landscape of terrifying new technologies that threaten to overwhelm fragile mankind! What is Extremis, who has unleashed it, and what does its emergence portend for the world? Includes interview with artist Adi Granov, a look behind-the-scenes of Iron Man: Extremis, a music video and more."