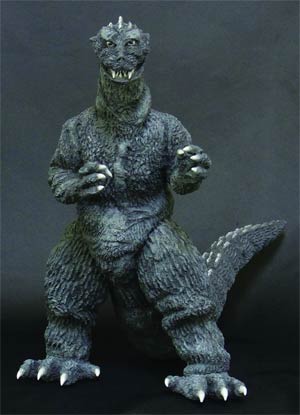 From Bandai, Plex Co.,Ltd. & X Plus Co.,Ltd. When Toho Studios learned that they had a hit on their hands with 1954's Gojira, they did what any good studio does after they kill off their main character: They resurrected him! Godzilla Raids Again (known in the U.S. as Gigantis, the Fire Monster) was the second in the now historic film series, and featured a new Godzilla and the first appearance of Anguirus! Presented in gray tones (replicating their appearance in the black and white film), Godzilla stands 12" tall and 18" long, while Anguirus measures 20" long. Each hand-painted vinyl figure is expertly crafted to capture every detail of these classic movie monsters!