You know it to be true- Next in our line of Star Wars collectibles, Sideshow is excited to present the Luke Skywalker Premium Format Figure.

After growing strong with the Force on Dagobah, Luke Skywalker returns to Bespin to face off against his ultimate foe and discover his destiny. Based on his appearance in Star Wars Episode V: The Empire Strikes Back, the Luke Skywalker Premium Format Figure has a detailed, life-like portrait that captures the likeness of Mark Hamill.

Standing at about 20" in height, Luke prepares to meet his destiny on a Cloud City base inspired by his famous duel with Darth Vader. The statue has an authentic Episode V costume sewn with fabric and pleather elements, with realistic fatigue to show just how far Luke has come in his quest to become a Jedi.

He comes holding his blue lightsaber, which has a light-up LED feature, as he prepares to defend himself against the dangers Bespin has in store. His belt comes with an additional pistol to holster in his belt while his saber is in action. 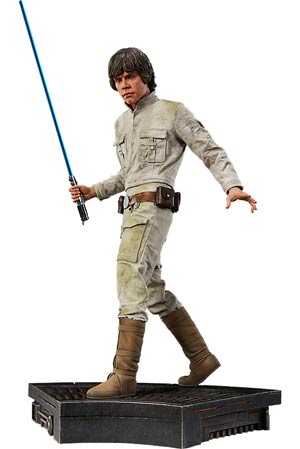