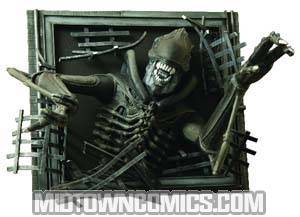 Taken from the classic sci-fi action film, Aliens, this intricately designed 9" wall statue depicts the film’s unstoppable Alien warrior attacking with its vicious claws. With acidic blood, razor sharp fang and claws, a deadly tail and a killer intellect, the Alien represents one of the greatest threats humanity has ever known. Sculpted by Rudy Garcia, each wall statue features a hand-numbered box with matching Certificate of Authenticity.