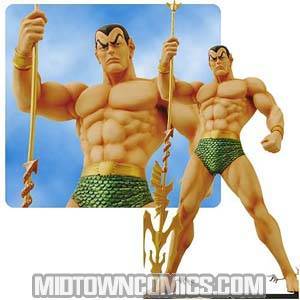 A Diamond Select Release! As the first Marvel mutant, Prince Namor commanded all the powers of Atlantis in his battle against the surface dwellers he thought were invading his home. Later offering assistance against the Axis forces of World War II, the Sub-Mariner began to interact with the surface world more often. With his super-human strength, invulnerability, and powers of flight, Namor has earned a place in history with the greatest Marvel heroes. Sculpted by Gabriel Marquez and limited, this statue features a hand-numbered base with matching box and Certificate of Authenticity.