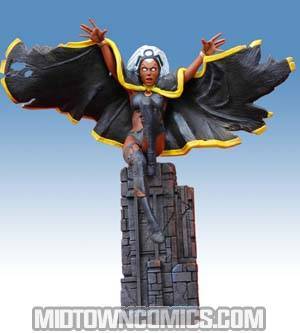 A Diamond Select Release! Third in the line of spectacular pieces, the Dark Phoenix Saga Storm Statue presents the African weather goddess as she battles her former friend. Forced to put aside her feelings and strike against the Dark Phoenix, Storm is depicted mid-attack as she calls upon the forces of nature. Part of the ongoing Dark Phoenix Saga series, each piece can be displayed alone or as one massive scene. Sculpted by Jeff Feligno and limited, this statue is hand-numbered with a matching box and Certificate of Authenticity.