We Are On Our Own HC - Midtown Comics 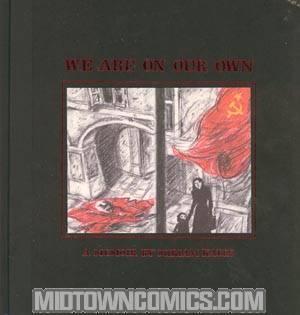 In this captivating and elegantly illustrated graphic memoir, Miriam Katin retells the story of her and her Mother's escape on foot from the Nazi invasion of Budapest. With her father off fighting for the Hungarian army and the German troops quickly approaching, Katin and her mother are forced to flee to the countryside after faking their deaths. Leaving behind all of their belongings and loved ones, and unable to tell anyone of their whereabouts, they disguise themselves as a peasant woman and her illegitimate child, while literally staying a few steps ahead of the German soldiers.

WE ARE ON OUR OWN is a woman's attempt to rebuild her earliest childhood trauma in order to come to an understanding of her lifelong questioning of faith. Katin's faith is shaken as she wonders how God could create and tolerate such a wretched world, a world of fear and hiding, bargaining and theft, betrayal and abuse. The complex and horrific experiences on the run are difficult for a child to understand, and as a child, Katin saw them with the simple longing, sadness, and curiosity she felt when her dog disappears or a stranger makes her mother cry.