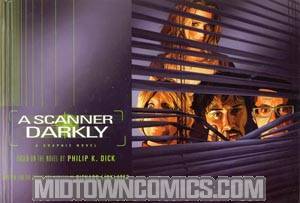 A haunting graphic version of one of Philip K. Dick's most popular and best-selling novels.

Bob Arctor is a dealer of the lethally addictive drug Substance D, which he also takes in massive quantities. Fred is the police agent assigned to tail and eventually bust him. What Fred doesn't know is that Substance D gradually splits the user's brain into two distinct, combative entities, and that he is, in fact, in frantic pursuit of himself.

A SCANNER DARKLY is caustically funny and razor sharp in its depiction of drug-induced paranoia and madness; it's an industrial-strength stress test of identity as unnerving as it is riveting. The novel is captured in this brilliant graphic vision, composed entirely of stills from the movie.