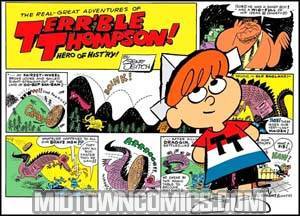 In 1955, Gene Deitch embarked on a daily comic strip for King Features Syndicate that he hoped would become his life’s work. One of the most unusual strips of the decade, Terr’ble Thompson was about a very odd little boy who had his “Werld Hedd Quarters” in a tree house and was regarded far and wide as “the bravest, fiercest, most-best hero of all-time.” This book collects the entirety of Deitch’s short-lived inspiration for Tom Terrific, and a new generation will discover what could have been one of the great comic strips of all-time had it continued. The strip is drawn in a simple, modernist style that served as an antidote to the ubiquitous Disney look that had spread into all facets of popular culture. Terr’ble Thompson was a visual and verbal feast of fun that blended time and space, with Terr’ble going on adventures with great historic figures like Columbus, George Washington, and Davy Crockett. This collection features annotations for the entire run of the strip by Deitch himself, as well as introductory essays by Deitch, his son Kim, and historian Dan Nadel (The Ganzfeld). The book collects both the dailies and Sundays, with many of the latter newly re-colored by Deitch. 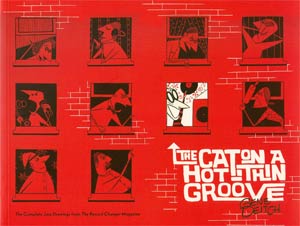 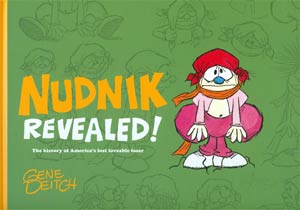