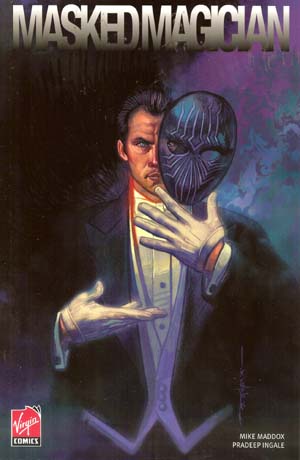 "9,000 years ago, an object of great power fell to earth—a simple statue. The men who tried to wield it were granted temporary prosperity, but soon, having upset the delicate balance of the world, they received the terrible consequences, and their kingdom came to ruin. A special Society of was set up to protect mankind from the statue’s power... which meant protecting the statue from the greed of mankind. The power of the statue was split into other vessels and scattered to the four corners of the planet. To further hide the statues and the existence of the Society itself, the members became the jesters, the fools, the storytellers of the world... what we today know as magicians. Where better to hide the source of real magic, than amongst a group of people who make their life’s work in fooling people into believing the impossible? Now, in the 21st century, the tremendously popular large-scale magician, Mark Swain, is using his illusions to help him steal the statues. The only people who stand in his way are Tom Worley, an inventor of illusions, and Anna Kneafsey, an amateur magician and daughter of Tom’s partner. Together, the two of them must piece together the mystery of the ancient Society and stop Swain from unleashing the terrible forces of the statues onto the world."

More From Chandrasekhar A.