"It's never a dull day, being a Magician. The mad mind of Warren Ellis is once again unleashed on combat magician William Gravel, this time on a full-color, on-going monthly series! Magic. Everyone thought that he was dead, including the Minor Seven, the secret enclave of Britain's Occult Detectives. But Combat Magician William Gravel is very much alive and looking for the answers to how and why his place in the Minor Seven was filled by another and what the secret society is doing with the Sigsand Manuscript, an ancient supernatural text of unparalleled power. In a quiet, country cottage, Gravel will find the first clues to the Sigsand's location and in the darkness of the cottage's basement, a disturbing, unnatural thing that slithered into our dimension by the power of the ancient tome... Brought here from somewhere that mortal man could not possibly comprehend. The kind of magic that can strip the skin from a screaming man's skull, or direct the path of a shrieking bullet through a maze of city streets, striking its target between the eyes with pin-point accuracy. This is not just magic... This is Combat Magic, wielded by Sergeant Major William Gravel, Warren Ellis' cult-hit sensation from the pages of Strange Kiss and Strange Killings, now in his own, ongoing, full-color monthly series!" 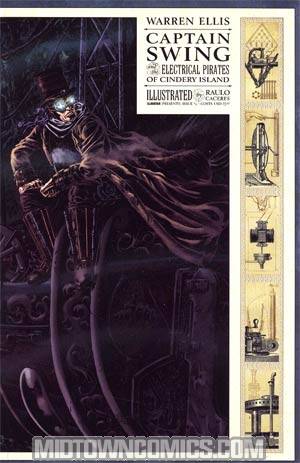