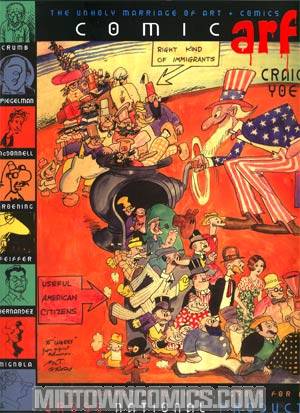 "Another great Arf book for 2008, and it features one of the greatest comickers of all: Milt Gross! The Gross-ness starts off with a stunning cover painting done in the 1930s but, as they say, ripped from today's headlines. It's all about immigration: Uncle Sam grinds up a sea of immigrants and out come... classic comic strip characters!

The Arf books are famed for unearthing unknown Old Skool cartoonist geniuses. Comic Arf showcases the brilliant Dudley Fisher who amazingly drew crowded scenes all from a bird's eye view. And Arch Dale is another unsung genius getting his due with his Smurfs-meet-Dr. Seuss characters, the Doo-Dads, who populated Canadian comic strips 75 years ago.

Arf also highlights unusual work from recognized masters. Walt Kelly, famed for his Pogo strip, did a surreal nightmarish strip for children presented in all its glory in this latest Arf tome. Amongst all this fun, Comic Arf is also proud to present a hard-hitting chapter this volume entitled ""The 15 Most Powerful Anti-War Cartoons of History,"" drawing from every major conflict of the last 200 years.

All thisand much more, from 1950s devilish horror comics to cartoonist portraits by Gary Panter and Mitch O'Connell."