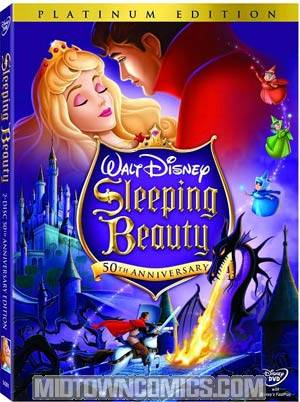 "Never before have the sights and sounds of this magnificent film been more alive. Now, through the magic of state-of-the-art technology, viewers can experience this groundbreaking film restored beyond its original brilliance and in the way Walt envisioned it - pristine, beautiful, utterly breathtaking. From the glorious celebration of Princess Aurora's birth, to the fateful day when she pricks her finger on a spinning wheel and falls under Malificent's evil curse, to Prince Philip's courageous battle against a fire-breathing dragon, the stunning artistry and spine-tingling sounds are transformed into a fantastic world. The adventures continue on this new two-disc Platinum Edition DVD and Blu-ray with a never-before-seen alternate opening, an all-new music video and more.""