"Mankind failed to master the Petroleum Age, and the resulting catastrophe, the ""Die Off,"" killed off 90% of humanity. One hundred seventy-five years later, nomadic tribes travel between fortified casino-cities in armored caravans, trading wares and defending themselves from Roaches — desert bandits descended from the inmates of maximum security prisons. This is the world of the Black Dog Clan. The desert highway is as long as it is dangerous. And when the Black Dogs stumble onto an ambush gone awry, they find themselves in a fierce firefight with a group of Roaches who have pinned down a lone traveler: a man from the north who's journeying south on a mysterious quest. But should the Black Dogs welcome him into their midst — or leave him on the side of the road for the dogs? Adapted from the award-winning screenplay by Screenwriter's Expo 5 winner Malcolm Wong, Dog Eaters is an action-packed story that's sure to grip audiences with its cinematic style and manga-inspired artwork!" 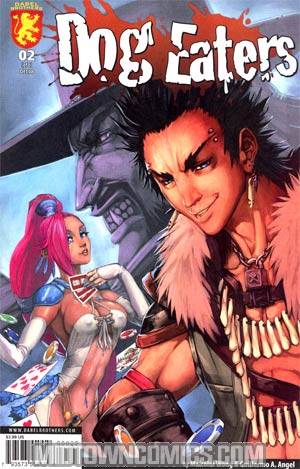