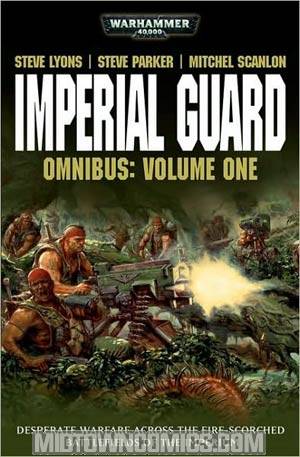 "The Imperial Guard is the largest body of fighting men in the galaxy. Drawn from the myriad planets of the Imperium, it is the solemn duty of these grim soldiers to fight the wars of the Immortal Emperor against the many enemies that threaten the very existence of humanity. With incredible manpower, and supported by massive battle tanks and hordes of priests, clerks and engineers, it is an indomitable war machine, the Hammer of the Emperor.

This omnibus contains three novels - FIFTEEN HOURS, DEATH WORLD and REBEL WINTER - each with its own associated short story. It is the ideal introduction to the Imperial Guard, and their struggles on the battlefields of the far future."