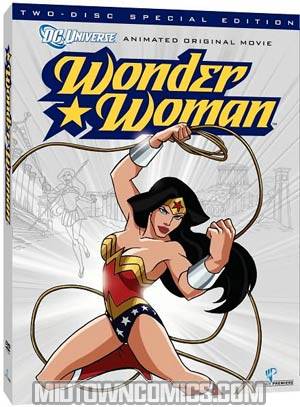 Wonder Woman begins on the mystical island of Themyscira, where a proud and fierce warrior race of Amazons resides.  They have raised Princess Diana, a daughter of stunning beauty, extraordinary strength and incredible fighting prowess. Diana possesses a host of super human powers granted to her by the gods and goddesses of Olympus and her strength and stamina are unparalleled. When Air Force fighter pilot Steve Trevor crash lands on the island, the rebellious and headstrong Diana defies Amazonian law by accompanying Trevor back to civilization. Meanwhile, Ares (the God of War) has escaped his imprisonment at the hands of the Amazons and has decided to exact his revenge by starting a world war that will destroy them all. It is up to Princess Diana to save her people and the world by using her gifts to become the ultimate Wonder Woman.

Wonder Woman: 2 Disc Special Edition and Blu-Ray versions will feature collectible packaging as well as 185 minutes of incredible bonus features such as:

•    Wonder Woman: A Subversive Dream - She is one of the pillars of DC Comics. We examine why Wonder Woman is important in the grand scheme of the DC Super Heroes and how her raw strength and power helped define a new generation of empowered women, who realized that their gifts of intellect and strength were just as powerful as their male counterparts.

•    Wonder Woman The Daughters of Myth – The riveting documentary historically defines the meaning of the Amazons and how this links in with the evolution of the Wonder Woman character from comics to screen.

•    Digital Copy Download– Warner Bros. is including a Digital Copy of Wonder Woman on the DVD which will provide fans a legitimate means to enjoy their favorite action hero anywhere they want on their portable video device.  Formats supported include: iTunes, Windows Media Player.  Restrictions apply.