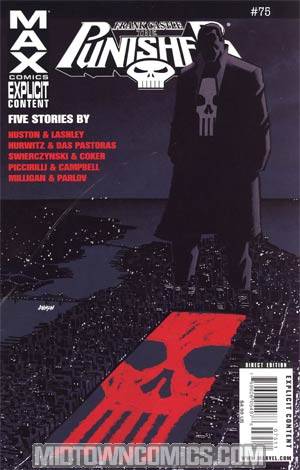 "Special double-sized 75th issue! Several years ago, under a cloudless day in New York’s Central Park, Frank Castle’s family was slaughtered in a mob crossfire. On that day, the man known as Frank Castle died and in his place was born the Punisher, a relentless engine of vengeance. Five stories take an unflinching look at what really happened that day, providing a penetrating look into the mass of hard muscle that once was Frank Castle’s heart. You won’t look at the Punisher the same way again. Featuring Charlie Huston and Ken Lashley’s “Smallest Bit of This”...Peter Milligan and Tomm Coker’s “Father’s Day”...“Gregg Hurwitz and Das Pastoras’ “Gateway” & Thomas Piccirilli and Laurence Campell’s “Dolls”.