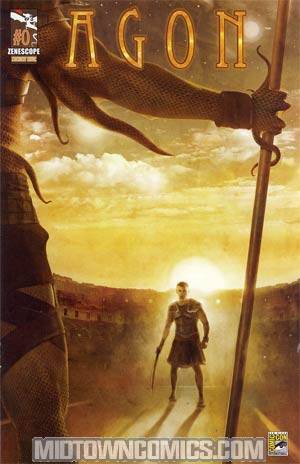 The year is 2012 and Earthy has finally made contact with an alien species however the message is very clear: Fight or Die! Forced to participate in an intergalactic gladiatorial battle that pits highly evolved species from various planets against one another. Earth's people must pick their best warriors to compete in the ancient combat ritual of AGON, a tournament which will ultimately determine the fate of the planet.

Sonny Grissom is a MERC, a mercenary who upgrades his body through cybernetic enhancements and powerful steroid boosters. But after years of serious mistreatment, Sonny's body is failing. With his conscience eating away, Grissom decides to gear up and accept the most daring contract of his wasted life, one that can save thousands of lives and give him a final shot at redemption. This sneak peek also includes the spectacular Merc catalog (going strong since 2051) with all the newest and best MERC upgrades now available!"