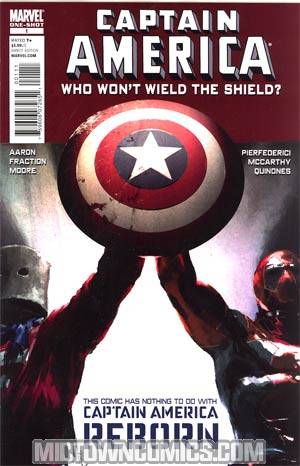 "Steve Rogers has returned! In fact he was in such a hurry that he actually came back before the story was done! But, whatever, I'm sure no one even noticed. Anyway, Bucky Barnes is the current Captain America, and has come into his own in the role in a story Captain America editor Tom Brevoort calls ""the greatest single marriage of words and pictures in the history of the English language. Suck it, rest of literature!"" But will Bucky go back to being the Winter Soldier? Are there others in line? Who cares?! All we're interested in is who WON'T be holding that Vibranium laced hunk of junk and what major new Marvel event comic it leads into. Who won't wield the shield? It could be not YOU!!! (Featuring a special appearance by everybody's favorite underused character, Deadpool! At last, Deadpool! In a comic!)"