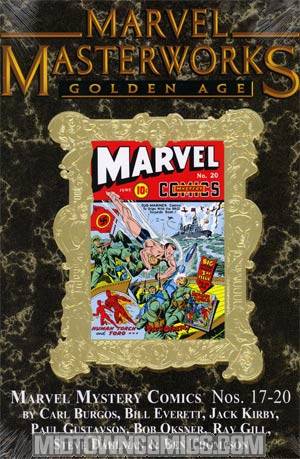 "The greatest comic magazine of the Golden Age returns with the Marvel Masterworks! Headlining the heavy-hitters of the Timely era, Marvel Mystery Comics has it all—from top-of-the-field super hero action to bizarre mystery, otherworldly noir, jungle adventure and boy detectives! And it all starts off with the history-making Human Torch/Sub-Mariner team-up by the titanic talents Carl Burgos and Bill Everett! Then the Human Torch's sidekick Toro, the Flaming Kid, makes his Marvel Mystery debut. Prince Namor, the Sub-Mariner, takes his uniquely anarchic brand of action straight to the Nazis' noses, while the Angel's origin is revealed and he begins a multi-part crusade against the sexy villainess, the Cat's Paw. Rounded out by Jack Kirby's eerie agent of vengeance, the Vision; the wonderfully weird Electro; Terry Vance, School Boy Sleuth; and the adventures of Ka-Zar, it's the classic package that made Marvel famous!"