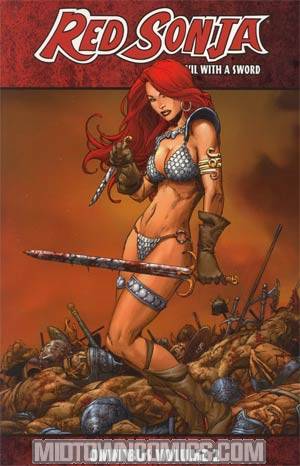 Kulan Gath controls the land. Red Sonja and her companions have been sent to the other side of the globe. Now the She-Devil must battle her way across Hyboria, encountering strange animal-men, vicious undead pirates, mysterious sea creatures and more to end the dark sorcerer's reign of terror. New allies are revealed, old allies are lost, and villains abound as Sonja comes face-to-face for the final time with Kulan Gath in a battle that can only end with the DEATH of Red Sonja! Written by Michael Avon Oeming and Brian Reed, and illustrated by Homs, Fabiano Neves, Mel Rubi and more, this 400+ page omnibus features issues #19-34 of the groundbreaking series, as well as a complete cover gallery by some of the biggest and best in the industry: Alex Ross, Sean Chen, Arthur Adams, David Mack, Ariel Olivetti, Paul Renaud, Ken Kelly, Frank Brunner and more!