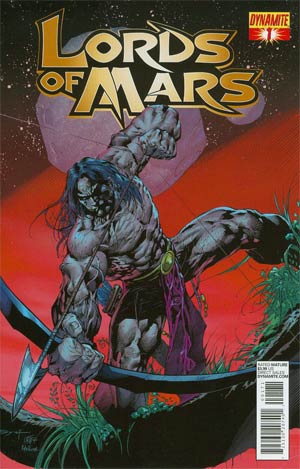 For comic fans that signed up ahead of time with their comic shop to reserve this issue, you can receive an exclusive Ardian Syaf cover! This Super Special Subscription Variant is only available for Comic Shop subscribers and limited to INITIAL orders ONLY!

An epic crossover event starring the two greatest heroes of pulp fiction begins this June! The legendary Ape-Man has claimed his title as Lord of Greystoke, but his very life is threatened when a hunting excursion with his fellow 'gentlemen' goes disastrously wrong. Meanwhile, on Mars, John Carter is forced to respond to a veiled threat from his defeated enemies. Mars and Earth might be separated by millions of miles, but a sinister force is at work on both planets, setting the two champions on a deadly collision course. It all starts with Lords of Mars #1: The Hunting Party. Set phasers for 'mayhem'!
Item #: 1276127 Diamond code: JUN130946 UPC: 72513020740100171