One of the most groundbreaking Marvel Comics of all is collected for the first time! Born to be the world's most fearsome fighter, Shang-Chi's life takes a major turn when he discovers the truth about his father, the villainous Fu Manchu! So begins the epic story of the Master of Kung Fu! On a quest to end the reign of his pernicious patriarch, Shang-Chi pits his deadly hands and furious feet against incredible foes like Tiger-Claw, Razor-Fist, the mysterious Midnight - and even the macabre Man-Thing! But will his mastery of martial arts be enough in a throwdown with the Amazing Spider-Man? Collecting SPECIAL MARVEL EDITION #15-16, MASTER OF KUNG FU (1974) #17-37, GIANT-SIZE MASTER OF KUNG FU #1-4, GIANT-SIZE SPIDER-MAN #2 and material from IRON MAN ANNUAL #4. 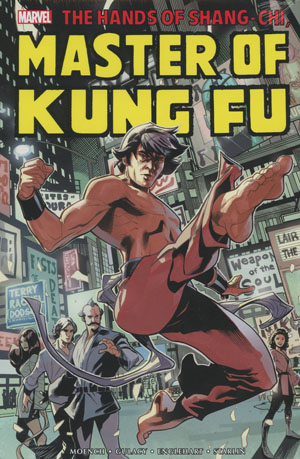