Inspired by Oscar Wilde's classic, GRAY tells the story of a dangerous woman on a mission of retribution against a group of powerful and sexually seditious men. In this supernatural revenge thriller and concluding installment from Stoker-Nominated and Audible Best-Selling author Arvind Ethan David, Detective Hank Wutan gets too close to the case as he learns - who is Ms. Dorian Gray?

&QUOTDorian is the hero we need now. You'll fall in love with her as she delivers justice to a modern world that's lost..." -Stephany Folsom, Writer of Oscar Winning &QUOTToy Story 4", Showrunner of Brian K. Vaughans &QUOTPapergirls"

&QUOTIncisive, intriguing, wickedly funny. Every bit as clever as it thinks it is." -Mike Carey, Eisner nominated writer of &QUOTUnwritten", &QUOTLucifer"

&QUOTIf you like your comics spicy and your characters vengeful, Gray is a rollicking mystery about gender, power, privilege, and justice, a 21st century updating of Oscar Wilde, with a decidedly #MeToo stance." -Winnie M. Li, Edgar-

&QUOTA contemporary retelling that holds nothing back. Gray is savagely funny, horrifically thrilling and brutally human. A classic story that clearly needs to be told now, putting the present moment in its crosshairs."

&QUOTGray claims to be &QUOTinspired by Oscar Wilde's The Picture of Dorian Gray&QUOT-- but don't be fooled, David and Koumaki have created something wholly original, daring, and entertaining here. It's Gray-- both the book and its titular hero-- that will leave readers inspired." 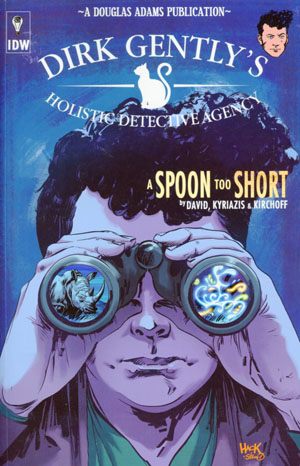