"Get ready for COUNTDOWN: ARENA — a 4-issue weekly event written by Keith Champagne (JSA) with art by Scott McDaniel & Andy Owens (GREEN ARROW) that pits the DCU’s greatest heroes against themselves! The villainous Monarch begins the last chapter of his campaign against the Monitors, combing the entire Multiverse to enlist the most powerful — or deadly — heroes and villains from throughout existence to join his army. The abducted must battle one another in Monarch's specially constructed Arena, where only the strongest will survive to join his battle against the Monitors. Carefully selected from worlds throughout all 52 universes, including characters from SUPERMAN: RED SON, DC: THE NEW FRONTIER, BATMAN: GOTHAM BY GASLIGHT, JSA: LIBERTY FILES, JUSTICE LEAGUE: THE NAIL, and TANGENT, among many others, three versions of each hero will walk into the Arena, and only one will walk away. Welcome to THE ARENA, where Monarch’s only rule is to survive at all costs." 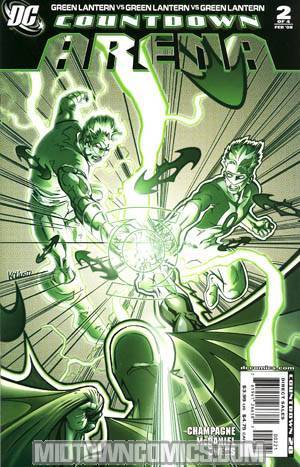