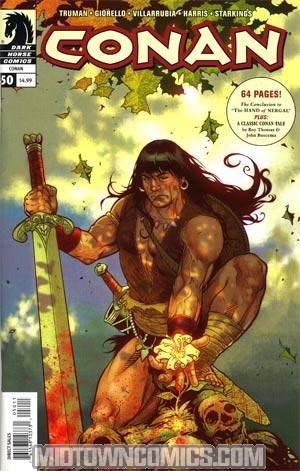 "Death has surrounded Conan the Cimmerian since he was a young boy, but he’s never had to face it like this. Victim of a vengeful curse, Conan’s steadfast companion must be laid to rest again, despite having already suffered a grisly death, but time is short. The Cimmerian must dispatch his old friend before the curse can claim all he has left . . . his very soul. Unfortunately, that isn’t even Conan’s most immediate concern. Surrounded by a demonic legion controlled by a power-hungry sorcerer, the barbarian and his comrades must stop the madman before he can conjure the very god of death itself and cross the fearsome deity into their realm to wreak havoc on all of Hyboria. It will take everything the warriors have to stop the forces of darkness before it’s too late! Be there for the final issue of the adaptation of Robert E. Howard’s lost fragment “The Hand of Nergal” and the final issue of the Conan monthly series—a special double-sized issue with over forty pages of story with a very special cover by returning Eisner Award-winning Conan cover artist Tony Harris! But fear not Conan fans, the mighty Cimmerian returns in June with the inaugural issue of Conan the Cimmerian, the NEW ongoing Conan series from Dark Horse, beginning a new chapter in Conan’s life! "