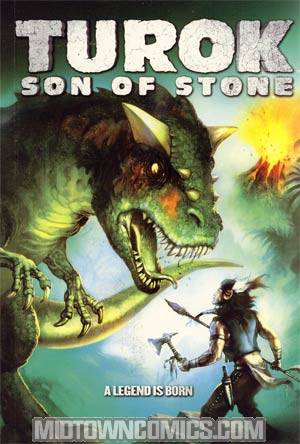 "Prepare for a bloody and action-packed re-imagining of this classic character. Turok: Son of Stone is based on the new blockbuster DVD of the same name, using actual footage from the animated feature! After a warring tribe falls upon his people, an exiled Turok has to return to save the day. Armed with an enchanted tomahawk, he heads into battle, but the opposition has special weapons of their own; muskets! When Turok is forced to retreat into a mysterious cave he is sent to a lost land filled with dinosaurs! Now in a savage realm with danger behind every corner, Turok will have to unleash the rage within him if he is to ever see his people again."