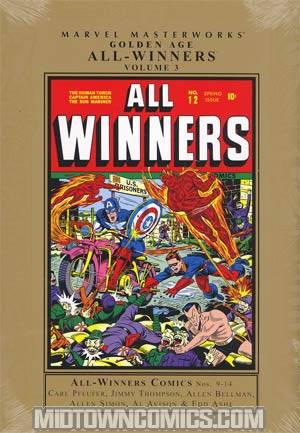 "It’s the titanic trio of the Timely Big Three — Captain America, the Human Torch and the Sub-Mariner — combined with Golden Age luminaries the Destroyer and the Whizzer in one all-out amazing series! Defending wartime America from Nazi airships, ape-men and anything and everything else the Axis can throw at them, the Human Torch and Toro burn up the comic page like it’s still 1943. Captain America and Bucky parachute into adventures from mad scientists to buzz-bombing Nazis. Meanwhile, the Destroyer stops at nothing — including a battalion of Hitler impersonators — to stop the Nazi threat. And the Pacific Theatre won’t be left waiting, not with the Sub-Mariner around! He takes it straight to the Emperor himself and comes back to clean up the docks while he’s at it! But before you speed away, don’t miss the Whizzer as he races through maddening mazes and thwarts the plans of kidnapping crooks! It’s comic-book adventure at its purest, so reserve your copy today!"