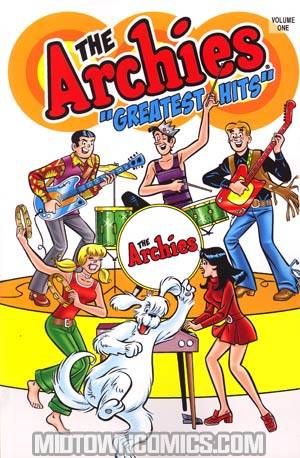 "Everyone's heard the hit song ""Sugar Sugar"" and children of the 1970s remember The Archies band from Saturday morning cartoons, but did you know the band actually started in comic books? Inspired by the runaway success of guitar-and-vocal groups like the Beatles, Byrds, and Beach Boys, The Archies made their debut in a 1967 issue of Life with Archie. But that was only the beginning. Looking for a group to follow-up his mega-successful singing group and TV comedy sensations The Monkees, music producer Don Kirschner found the answer when he spotted The Archies in his child's comic book. It wasn't long before a group of studio musicians became The Archies ""for real,"" and began recording music that would become bubblegum pop standards. Simultaneously, the first series of Saturday morning Archie cartoons was developed and it was decided to have The Archies' band in the series as well. The Archie Show premiered on the CBS network on September 14, 1968. An Archies album followed shortly thereafter and the hit single, ""Sugar Sugar,"" became the top-selling single of 1969. The rest, as they say, is musical history! Now fans can relive that history with some of The Archies' most tuneful tales in this collection that features a painstaking restoration from original publishing elements, and a special foreword by Ron Dante, the famed singing voice of Archie and a successful singer-songwriter, musician and producer."