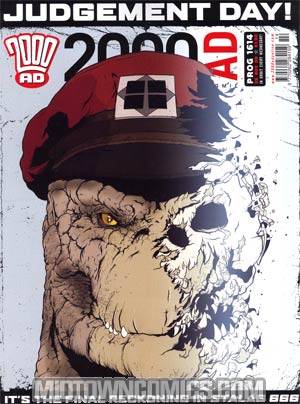 "The cult British SF anthology comic, 2000 AD features stories by some of the best writers and artists working today! New character Ampney Crucis makes his debut in ""Vile Bodies,"" a 1920s-set Lovecraftian horror series scripted by Ian Edginton (Scarlet Traces) and painted by Simon Davis, in which Crucis, a survivor of the Great War, discovers corruption in his less than green and pleasant land! Elsewhere, the prisoners are fighting for their lives in ""Stalag 666"" by Tony Lee (Doctor Who: The Forgotten) and Jon Davis-Hunt; war-robots the ABC Warriors are on a desperate mission of mercy in ""The Volgan War"" by Pat Mills (Marshal Law) and Clint Langley; Nikolai Dante is back, courtesy of Robbie Morrison (The Authority) and John Burns (The Avengers); and there's more law enforcement on the streets of Mega-City One with Judge Dredd!"