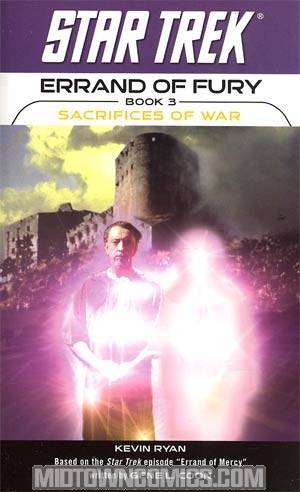 "Poised on the verge of interstellar war, Captain Kirk's last best hope that the Federation can stop the Klingons is the people of Organia, avowed pacifists.

Forced to disguise themselves as interstellar traders, Captain Kirk and Mister Spock are trapped on the primitive world of Organia as Klingon Defense Forces occupy the planet. Determined to make the Organians see that they need not bow to oppression, the Starfleet officers sabotage Klingon materiel. In retaliation, the Klingon captain, Kor, executes many Organians. Unconcerned, the Council of Elders begs Kirk and Spock to stop the violence.

While in deep space the forces of Starfleet and the Klingon Empire scramble to position their fleets for the first onslaught of what could be a long and deadly war."