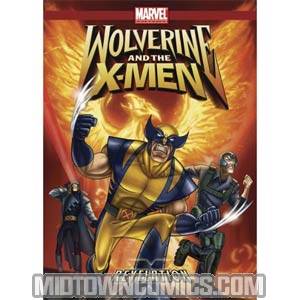 "The world's end arrives in eight days. Will WOLVERINE and the X-MEN discover the deadly secret to stop it? Uncover the truth in WOLVERINE AND THE X-MEN VOLUME 5: REVELATION with five gripping episodes. As the X-Men face a threat lurking in their midst, ANGEL goes against his own father to save fellow mutants. But when his wings are taken from him, will he throw away everything for revenge? Next, dangerous secrets await SCOTT in the depths of his own mind when he attempts to rid himself of his memories of JEAN GREY. Meanwhile in the future, XAVIER struggles at all costs to get information back to Wolverine, even at the risk of ROVER and MARROW's loyalty. He must act quickly, before GAMBIT succeeds in his treacherous game of thievery. Because if he doesn't, a power more deadly than anything the X-Men have ever faced will put the world at risk: a fiery entity known as...THE PHOENIX.