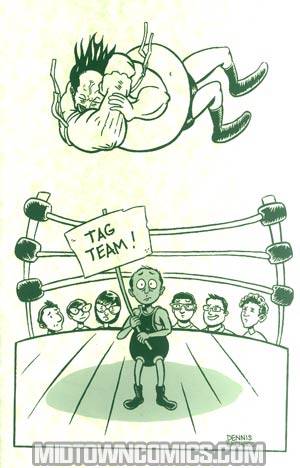 In six timed steps, six cartoonists break the comics making process into six steps, each one taking the reins on one and only one step. Each story has a different writer, penciler, inker, etc. Think of it as a rock band where each member plays a different instrument on every song. That's TAG TEAM.

""Tag Team is more than a comic — it’s a new game, it’s a process, it’s a new take on making comics that’s a reaction of sorts to the now-venerable 24-Hour Comics challenge, created with that kind of energy/focus/devotion without the rushed, sloppy quality typical of 24-Hour Comics."" --Steve Bissette"