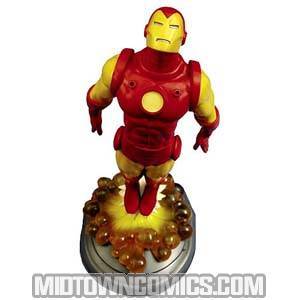 A Diamond Select Release! An Art Asylum Design! When Tony Stark’s life was almost ended in an explosion, little did he know it would forever change his destiny. By creating his advanced armor to keep himself alive, Iron Man became the driving force behind the Avengers — a team responsible for saving the world on countless occasions. Sculpted by Art Asylum, this impressive Classic Iron Man Statue depicts the hero in his most iconic armor as he blasts toward his next battle. This statue features a hand-numbered base with matching box and Certificate of Authenticity.