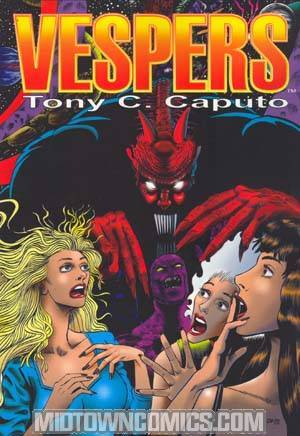 Vespers follows the exploits of Vesper, a Madonna-like rock star, who also happens to have mystical, supernatural powers. She may be a talented singer, but it's these powers that fuel her success, distorting her image and how many of the public perceive her; witch, demon, whore, saint, disciple. The overwhelming paparazzi alone take her to the brink of insanity, but cult worshippers, animal sacrifices, and the inability to find even a regular date isolates her from the rest of the world. Movie stars and fellow rock stars are afraid of her, shadowed by her iconic image, and strange powers, further drowning her in a loneliness that drives her to drugs and alcohol. Until one day, while promoting her new music CD, she meets Connie Severin a.k.a. Kinesis, a fellow super-freak, who's last real relationship was with a self-destructive, drug addicted vampire. Together they create Vespers, a support group for the inhuman, the superhero, and the supernatural. A rock star, a centerfold, a supermodel, a navy seal, a zombie and a guardian angel all eventually realize that their meeting wasn't a coincidence at all, but were brought together by fate to fight the ultimate evil in the battle for all life on Earth!