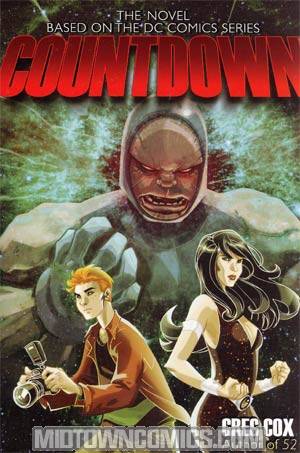 "The explosive novelization of the events that followed the cataclysm of INFINITE CRISIS.

Cosmic legend has it that when the primordial gods of antiquity perished in some bygone cataclysm, the universe gave birth to a new breed of gods who reigned from two eternally warring worlds, the heavenly New Genesis and the hellish Apokolips. Now, a vast conspiracy of evil is determined to eradicate the New Gods, stealing their souls to wield universal power that can destroy all of reality.

Jimmy Olsen, Superman's pal and the redheaded photographer for the Daily Planet, exhibits powers of his own and, with them, has the opportunity to become a hero. Meanwhile, Mary Marvel awakens from a coma to discover that she's been abandoned by her family and friends--and her magical ability to wield the thunderbolt.

Donna Troy, Jason Todd, and Holly Robinson, once super heroes, were forced to retire and rejoin the ranks of humanity. Until the Earth calls upon Wonder, Robin, and Catwoman once more to prevent a crisis beyond all imagination.

At the end of an age in which time, space, and reality may bow before such sinister forces, the fate of the Earth lies in the hands of five unlikely super heroes who have one destiny to fulfill: to save the world at all costs, regardless of the consequences."