Tomb Of Terror One Shot - Midtown Comics
View All Issues 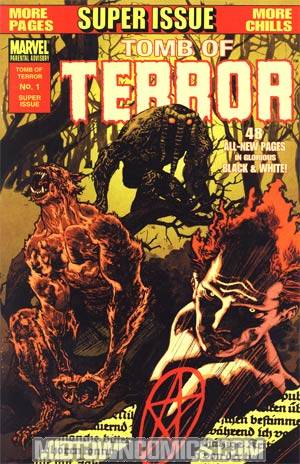 "Marvel's most terrifying monsters star in four tales of harrowing horror! Jack Russell, the Werewolf by Night stalks a killer werewolf in the mountains while searching for a cure that will end his curse. The mal-formed Man-Thing, temporarily in possession of his mind, attempts to save a man from certain death at the hands of racist hunters. And Son of Satan battles a possessed child killer along with the murderous voices in his head. All this and much more in this all-new, all-black-and-white one-shot in the spirit of the Mighty Marvel Magazines of yore, but ALL-NOW in style!"