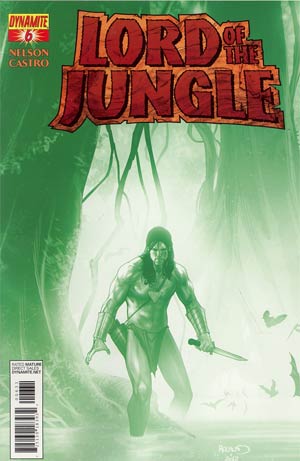 Lord Of The Jungle #6

"Cannibalistic man-apes… pirates… gigantic crocodiles… horny gorillas… Tarzan and Jane Porter have survived a lot! But they will face their most devious adversary yet - not in the jungle, but on the mean streets of Baltimore. Jane has attracted the unwanted attention of a notorious gangster, who wants to marry her so he will appear 'respectable'. Normally Jane would tell him to take a hike, but her father is deeply in the gangster's debt! Tarzan travels halfway around the world to save her, but his savage instincts threaten to rip him and Jane apart forever. Don't miss Lord of the Jungle #6: The Light of Civilization, the thrilling conclusion to the lord of Greystoke's first adventure!"