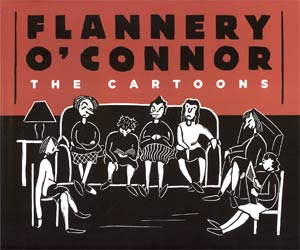 Fantagraphics is honored to bring the little-known early cartoons of one of the greatest writers of the 20th century to a 21st century readership. Flannery O'Connor: The Cartoons reprints all of the cartoons she did for several small newspapers and University publications in the 1940s in which she lampoons student life and the impact of World War II on the home front whilst trying out artistic techniques that were later deployed in her fiction. The Southern Gothic humor and acid observations will be instantly recognizable to all fans of this beloved icon of American literature.